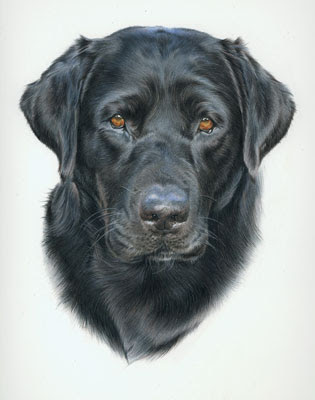 I have had a run of Black Labs to draw recently and this is the last of them - for now anyway. I have another to do in a couple of months which I’m looking forward to doing as they’re great dogs and I always enjoy drawing them. Need to stock up on my black pencils before then though. 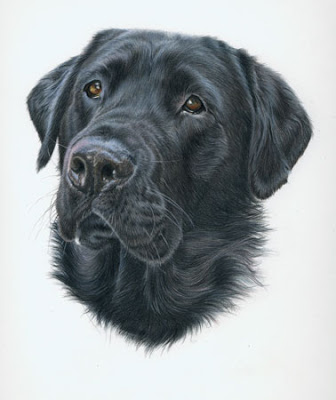 Schools are back tomorrow so hopefully things will return to normal behind the easel with more work getting done. I never seem to settle into my routine when there are kids around as I‘m always being distracted with one thing or another – I have a daughter who has an aversion to walking and prefers to be chauffeured around, pretty much on a daily basis. When they’re at school I get the peace and quiet I need to concentrate on my work.

I have not long finished this black lab. He has been sat on my easel all weekend to look at and see if there are any areas that jump out at me needing attention before I call it finished. I always find leaving a drawing for a couple of days and giving your eyes a break from it highlights any areas that might need fixed or worked on. All that’s left to do now is to have it mounted/matted before it's shipped off to its new owner. 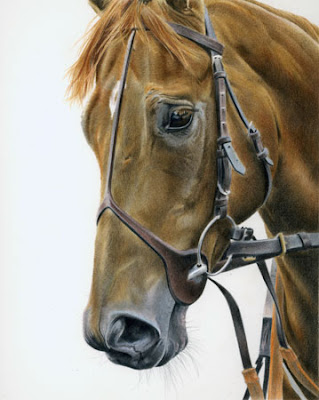 On Parade
Coloured pencil on paper

And yet another horse to add to my series. My reference for this one was taken from the many photos I took at the races back in July and is my first with bridle/reigns included. I spent the majority of my time there admiring the horses as they were taken around the parade ring and the rest of the time wishing I had a pass to go in and get closer to them. There are a few more race days to go before the end of the season so I might yet - provided I can find the confidence to ask around and enquire.

I’ll be taking a break from my horses for a bit while I turn my attention to commissioned work. My summer break is now over – or should I say my break from the easel as I didn’t go anywhere with sun, sea or sand but spent the majority of it stressed on the phone to Microsoft while trying to set up my new computer. For those interested (and if I can compose myself) it is STILL not working and I am no closer than I was three weeks ago to getting my prints.

To make matters worse the Microsoft technicians have apparently gone and added to the initial problems and can’t sort it out - unbelievable. I’m not exaggerating when I say I can be on the phone to them for up to 2 hours at a time and I’ve been on the phone to them numerous times so you can imagine my frustration. Grrrrrrrr, rant over before my blood pressure rises again.

And breath..... next up on the easel is a lovely Black Lab.