My computer has annoyingly decided to crash on me so until I know whether it is fixable or not I will be offline for the next few days (possibly more - unless I can separate my daughter from her laptop!). This of course means I can't answer emails, etc, but will reply as soon as I can. Computers! Why do they have to give up on you?!?!
Posted by Laura at 11:13 pm 3 comments:

A Lab or two 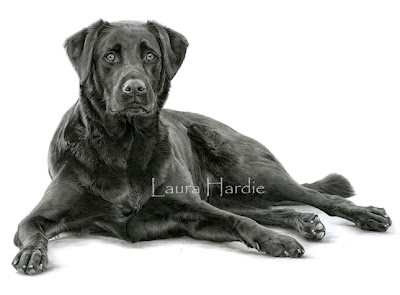 Drawing number 3 (still trying to think of a title for this one) is now finished and can hopefully join Devotion and Patience at an exhibition in aid of Cancer Research here in Edinburgh later in the year. I will give details of this nearer the time for anyone who might be interested in going along.

My painting plans didn’t quite materialise after a disastrous start saw my attempts end up in the bin followed quickly by any enthusiasm I had left for it! Painting isn’t alien to me having done many in the past but it’s been a good few years since I’ve used my brushes and I found the whole experience frustrating. I just need to get used to them again and make paint like me. More patience would help too! I’ve not given up and I am going to go back to them as believe it or not I really do want to paint.

Still in ‘experiment mode’ I thought I would try coloured pencil on gessoboard instead and, after a bad start where I hated everything about the combination, I’m starting to like it. Saying this I’m not sure I’ll attempt another drawing on this surface simply because it doesn’t suit my way of working. I like to build up my values and tones through many layers of pencil and you can’t do that with gessoboard – I can get three, maybe four, layers at most. I also like my detail and couldn’t get as much of it in as I’d like which I thought was a good thing to start with as I’ve often talked about ‘loosening up’ and being less detailed but my hands say different. I guess you draw the way you draw and that is that. 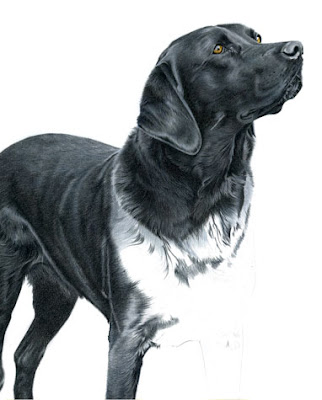 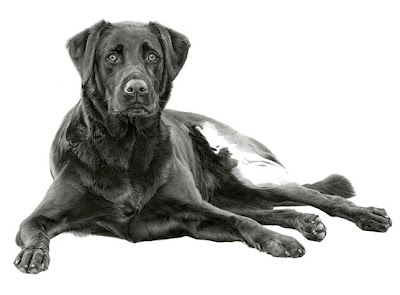 Wish my eyes were what they used to be 20 years ago! I’ve been noticing lately just how easy it is to over strain them if I spend too many hours drawing, and I’ve the headaches at the end of the day to prove it.

Not too much more left to do on my latest black Lab and then I’m going to put my pencils away for a while so I can play with paint again. I’ve been promising myself for long enough that I would dust of my brushes and I’m looking forward to it – I even have my first board drawn up ready to go but admit it looks a lot more daunting than a blank sheet of paper somehow. 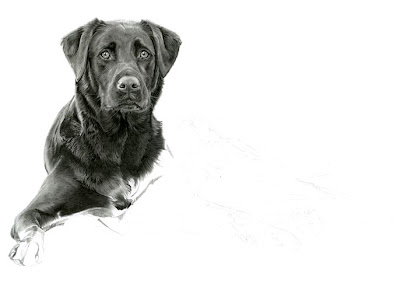 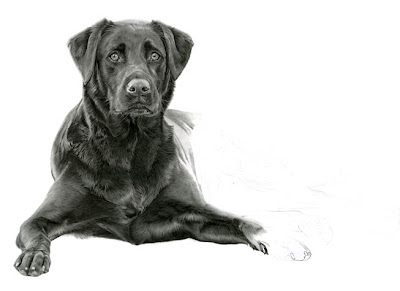